When hunting for new antibiotics, we can use what works already and change it with chemistry; rendering novel medical candidates. Or, we can delve below this stratagem and go back to the source, to unearth entirely undiscovered classes of molecules.

Where can we find these molecules?

They are within bacteria, so they are all around us.

The earth is teeming with bacteria, and they are in a constant, perpetual war with one another. Bacteria have been found deep underground 1 and in high concentrations in the upper atmosphere2. There are as many bacterial passengers within us, as the cells that we are made from.3 They compete using molecular weapons and these are the things that interest us. To extract this martial-chemistry we must first identify an antagonistic relationship between two bacterial species, then find a way to study the aggressor.

Finding new bacteria that express antibiotic potential is easy. Isolating these bacteria for study is the crux of the problem.

The word that describes this isolation is axenic. It is the state of a culture in which only a single species can grow, free of all other contaminating species. An axenic medium, is something in which you can grow one thing free of other things for study.

At this time, 85-99% of bacteria and archaea cannot be grown on their own in a lab4. We have not discovered their axenic media. They live in complicated, interdependent webs and sometimes they even live within other cells.

So even if we can find two battling bacteria, how can we pull them apart and grow them in axenic isolation so as to appropriate their molecular arsenals? The chances of doing this are slim, but if we could just do it, we might just extract the treasures we are looking for.

An example of an axenic defiant bacteria that is also causing significant mischief to humanity, can be found in Coxiella Burnetii. Coxiella Burnetii, is pronounced as: cock-sea-ela ber-netee-eye, and it lives within other cells. It's like a bacteria's bacteria. It is an efficient parasite, in that it does not produce a lot of its own nutrients. Instead, it steals them from its host cell. Its need of this external nutrition and its want for very specific environmental conditions has made it very difficult to isolate in the lab.

Coxiella Burnetii is the source of a disease called Q-fever. So much misery has been caused by this disease that both the American and the Soviet states independently developed it as a biological warfare agent.5

Coxiella Burnetii is so small that it can pass through water filters. It is tough; it can withstand hot temperatures, many antiseptics and dry conditions. It is one of the most infectious organisms that we know about since the inhalation of only 1-10 of them is required to give you the disease. The bacteria can become airborne and travel for tens of kilometres. It can infect birds, reptiles and mammals and it creeps and crawls across the land within ticks. 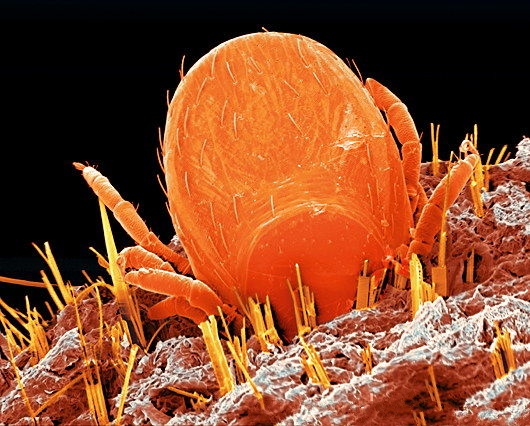 The Q in Q-fever stands for 'query', and it is not fun. When you get it you fever and experience complete exhaustion. In this way, it acts as a kind of anti-mitochondria. Generally speaking, any sort of nasty symptoms you might get from a typical-flu, you can also experience while infected with Coxiella Burnetii. For this reason, it is often misdiagnosed by doctors.6 The chronic form of the disease is manifested within 2 percent of those who get it ─ untreated, it is fatal.

So should you worry about Q-fever? I wouldn't, well, unless you are planning to fight the Soviets, or if you work directly with animals in a slaughterhouse or a ranch. The majority of the cases of Q-fever come from the amniotic fluids of birthing livestock. Only 50 percent of people exposed to it show symptoms and it is treatable using antibiotics. If you come into contact with a lot of livestock, you might want to consider getting a flight to Australia for an inoculation. That is right, the American Government has weaponized it as a biological warfare agent, but they haven't let its vaccine pass through their FDA.7

This might come as especially bitter news to members of the Seventh Day Adventist church, since they volunteered roughly 2300 of their youth as human guinea pigs in order to find this Q-fever vaccine.8. It was developed during operation whitecoat which ran from 1954 to 1973, a time over which the draft was active in the United States. The Seventh Day Adventist are "conscientious objectors", which means that upon being enlisted they had to take on a non-combat role within the military. To avoid being sent overseas, a young Adventist conscript would often agree to inhale infectious agents, including Q-fever.9

Q-fever is of interest to a military because it would make the opposing force sick en masse, without killing them. It is not easily transmissible between people, so there would be a small chance of creating a global conflagration. WWI might have been a short war, had one of the sides developed a Q-fever vaccine.

Up until recently, Coxiella Burnetii could not be isolated within the lab. This all changed when Dr. Robert Heinzen and Dr. Anders Omsland, unlocked its mystery.

In the 1990's Dr. Robert Heinzen tried to culture Coxiella Burnetii, but he did not get good results. So, he temporarily backed away from the challenge and marshalled his energies in more productive directions.

That is, until 2003 when the Coxiella Burnetii's genome was sequenced. This provided more information which could be used to unlock its mysteries.

He enlisted the Post-Doc Anders Omsland to his newly founded research institute. They looked upon the genome and found clues that led their research efforts. After searching for four years and trying hundreds of nutrient combinations, they discovered that Coxiella Burnetii can be isolated by reducing the oxygen content of their culture. They have found its axenic media and with this technology they have stripped away a lot of the complexity shrouding this disease.

As with any technology it can be used for good or to harm. Coxiella Burnetii is one the of the most infectious organisms known to man. It just got a lot easier to grow it in a lab. This will make it easier to find its cure, but it has also made it easier to manufacture it in large batches.

Now Coxiella Burnetii waits, naked, in front of humanity. It will be interesting to see what happens next.

When talking about societal trends, the things that cause massive shifts are exponential in nature. These things are catastrophic.…

Dr. Andrew G. Myers has been researching new chemical sources for antibiotics, often without being funded. His approach: Start…